Group aims to raise £75k across the year, starting with a ‘50k for 50 Years’ campaign in March

TRAD Group (‘TRAD’), one of the UK’s leading scaffolding and access companies, has announced that it will be supporting three national charities during 2021, as part of its 50th anniversary celebrations.

The Royal British Legion, MIND and the Multiple Sclerosis Society have been chosen by TRAD’s staff members across the UK, and the group has committed to raising at least £75,000 over the year, which will be equally split between the charities.

TRAD’s first big fundraising campaign was launched recently. The ‘50k for 50 Years’ campaign is encouraging staff members to complete a 50-kilometre challenge during March – they can do it in any way that works for them – walking, swimming, cycling, running – and over the whole month. TRAD’s target for this campaign is £15,000, and it has set up a dedicated account for supporters and sponsors to pay into.

The Royal British Legion helps members of the Royal Navy, the Army, the Royal Air Force, veterans and their families. It is best-known for its annual poppy appeal, but offers day-to-day support to serving and veteran armed forces personnel and is active in campaigning for their care and rights. You can learn more here: https://www.britishlegion.org.uk/

MIND supports better mental health. It is a nationwide charity that offers a wide range of information and support to those with mental health issues and the people who care for them, and is an active campaigner for a better understanding of mental health and greater support for it. Find out more at: https://www.mind.org.uk/

The Multiple Sclerosis Society supports people with Multiple Sclerosis, a condition that affects the brain and the spinal cord, resulting in a wide range of symptoms. More than 130,000 people in the UK have MS. The charity runs a helpline and offers a wide range of support for everything from managing finances to supporting carers. Their website is: https://www.mssociety.org.uk/

“We have already raised just under £10,000 for our anniversary appeal,” said Paige Matthews, CFO at TRAD Group, and part of the employee group managing the fundraising for 2021. “Six thousand of that has been donated directly by TRAD, and the rest has been raised through company events including a pyjama day and a Christmas raffle. That’s a great start, and we’re now encouraging staff members to step up to this challenge in March to help us make significant inroads into our target for the year.”

TRAD has a range of other plans for its year of fundraising, including individual challenges and internal challenges between its six depots around the UK. You can help support all these charities by donating to TRAD’s appeal at https://paypal.me/pools/campaign/115558736507729847. 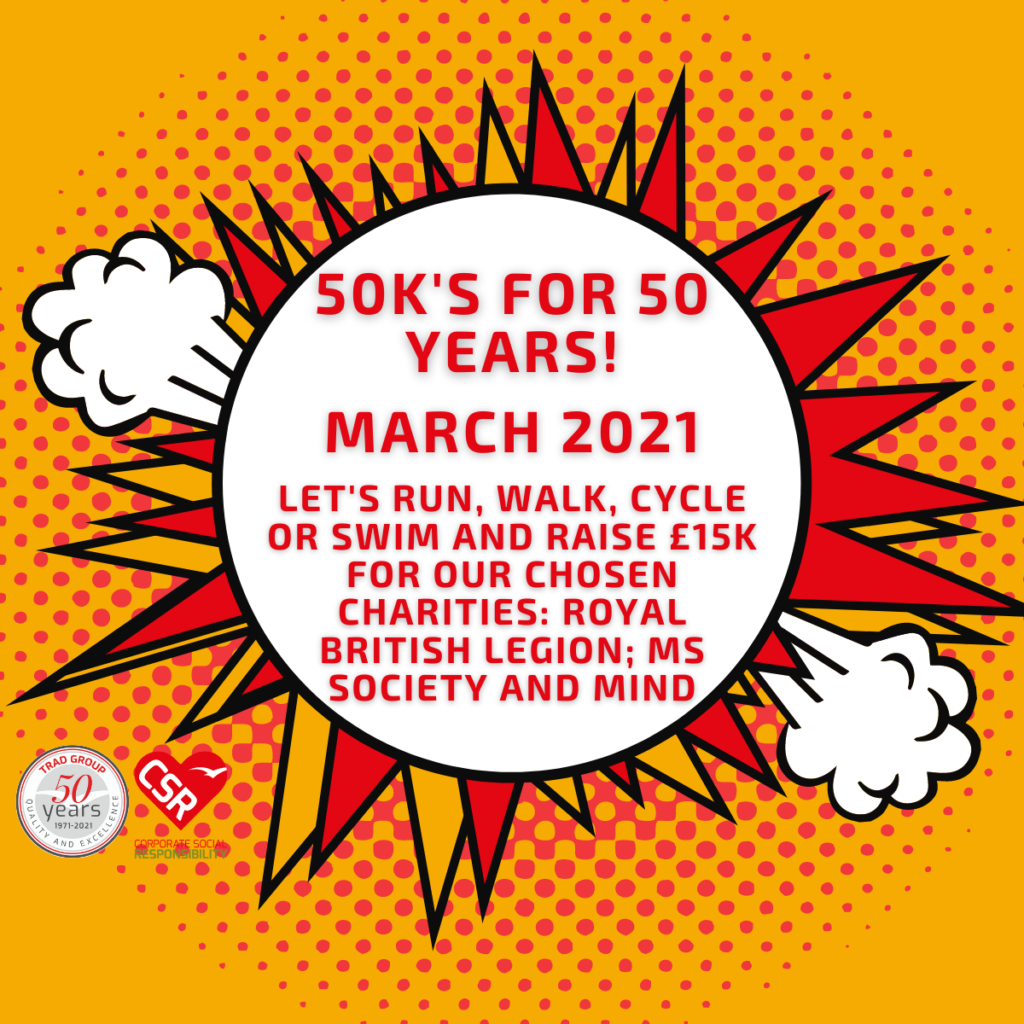