"If you do a good job people see the potential in you and you will be given a chance."

Annie joined TRAD in October 1996 as a ‘Girl Friday’, and for those not in the know this was a commonly used term to describe a female employee who was responsible for a wide range of tasks such as secretarial and clerical work. Her tenacity, enquiring nature and skill with numbers has seen her work in a number of roles before becoming a surveyor. Prior to joining TRAD, Annie held a number of positions all focused on clerical work, credit controlling and administrative work in a number of industries including banking, computers, licensed trade and petrol stations. She also spent a couple of years managing pubs and those that know Annie will not find it a stretch to image her behind the bar pulling pints and making witty come-backs as the locals get rowdy on a Friday night. Her journey into her current role was a slow burner, she initially did about 6 months in 1997 as a trainee surveyor alongside other responsibilities including payroll and buying but these soon took over and the training took a back seat for a while. It wasn’t until 5 years later that she returned to working closely with a surveyor and her interest in this area was renewed – she assisted the surveyor with credit control and reconciling accounts until they left.

Annie’s talents were spotted early on by Neil Garner who was keen to have Annie in his team, seeing what a great job she had done. So when the position opened up he was keen to support Annie into a permanent move into her role as Surveyor, which she has been doing now for over 10 years. A lot of her experience comes from on-the job learning and guidance from her colleagues and mentors. Annie says that teamwork is essential in her role because everyone is accountable so you need to communicate to be able to do the best job.

Her current role includes providing valuations on a job, working with managers, accounts and attending meetings with clients alongside the project manager. The best part of the job for Annie is getting to the final account on a job, using the working relationships with clients’ surveyors that have been built over the duration of a job to close on good terms, and of course at a profit.

Annie states that at TRAD “if you do a good job, people see the potential in you, then you will be given a chance”. In addition to her own progression, Annie recounts a number of scaffolders who have come ‘off the tools’ to become a ‘suit’ within TRAD. Stating that the working life of a scaffolder goes to advanced years but it’s great to see so many people at TRAD using their knowledge and experience in other areas of the company. 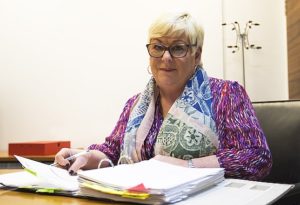